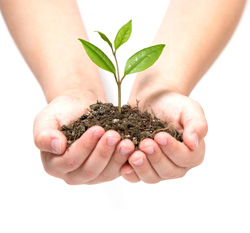 The story of Polyfulmate began almost 30 years ago, in Chernobyl, Ukraine, site of the worst nuclear power plant accident in history. Radiation from the Chernobyl disaster, as it has come to be known, affected an estimated 7 million people in the former Soviet Union and throughout Europe. During that time, Delivre chief scientist Gary Black, then a consulting scientist to the United Nations, was asked to serve on a scientific board sponsored by the UN for the study of radiation effects on glandular and cellular health of the disaster victims. Black’s work focused specifically on the over 500,000 children who were exposed to radiation.

During the course of his research, Black served on two committees specifically investigating skin care for children. He noticed that one remedy which was being used to treat the terrible burns and lesions that the victims had endured was yielding remarkable results. The treatment was a local mud which was being applied directly to affected areas of the skin with dramatic results. It seemed to Black that this mud was capable of working miracles in healing skin and cellular deformities. Intrigued, Black collected samples of the mud, which, upon analysis, was found to contain high levels of humic and fulvic acids. Black extracted these compounds and formulated them into a series of tinctures and topical creams to which he added botanicals and essential oils of known benefits in the treatment of burns. His results were nothing short of remarkable. The remedy came to be known as “Black Mud.”

One of the many children Black was introduced to throughout his time in Belarus was a three-year-old girl named Nadia Andreosoff. Due to her exposure to Beta Radiation, Nadia suffered from recurring skin lesions and Erythema of the skin. By only the 6th day of treatment, including baths containing Black’s fulvate extract, and applications of “Black mud,” Nadia’s open lesions were closed, and the skin discoloration in remission.

Nadia’s amazing recovery from the severe radiation burns and lesions affirmed Black’s belief in the effectiveness of his formulations. Black continued to successfully treat the damaged skin of many of the survivors of the Chernobyl disaster. Over the course of the next 20 years, Black and his team continued to study the composition of the ancient “Black Mud” and to refine his formulations for the relief of damaged skin. The Delivre family of skin care products we offer today are the result of more than 20 years of research, development and commitment to healing and protecting your skin through the power of nature. 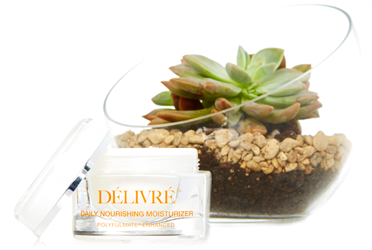 Water. Our bodies crave it and we depend on it to survive. Yet everyday exposure to the elements saps our bodies of this essential element, leaving us feeling parched. Dry skin can be uncomfortable and leaves skin looking dull and aged. The foundational step in achieving the smooth, baby-soft complexion we all seek is to have well-hydrated skin.

Délivré (pronounced de-liv-re in French)  is a brand on a mission to deliver healthy, beautiful, radiant skin to the world. Our products are powered by a unique and powerful Fulvic Acid called Polyfulmate. Fulvic Acid is well documented for it’s healing powers on body and skin, and Delivre is the only skin care product containing Polyfulmate. This naturally occurring organic substance is the molecular equivalent of a buried treasure for skin care. Délivré has harnessed the Miracle Molecule of Polyfulmate to build a body care brand to help you take care of your skin from the inside out. We want you to feel the difference of invigorated, beautiful and healthy renewed skin.